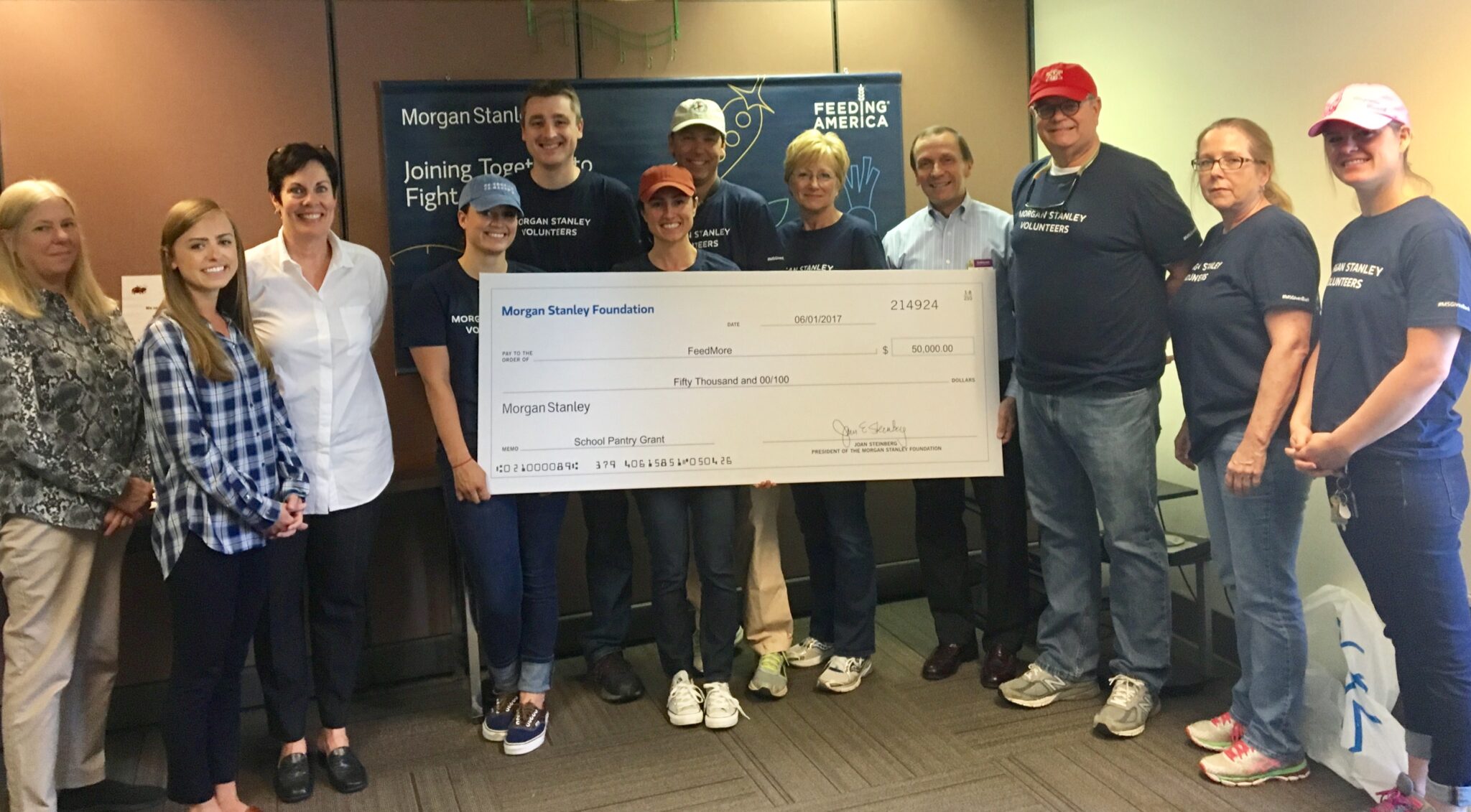 Richmond, VA – FeedMore today announced a $50,000 grant from the Morgan Stanley Foundation to fund its pilot School Pantry program in Prince Edward and Halifax counties, a child-hunger initiative that helps low-income families have a readily accessible source of healthy and nutritious food to prepare at home. Employees from Richmond-area branches presented the check and volunteered at FeedMore as part of Morgan Stanley’s “Feeding Kids Around the Clock” initiative, a full day of activities across the globe to help the fight against childhood hunger.

The Foundation is awarding a total of $750,000 in grants this month to food banks across the country. Employees from the Firm are also volunteering today in 40 different locations, including Boston, to pack and sort food in preparation for the summer, when four out of five children who typically received reduced and free lunches through schools, lose that access to nutrition. Through its partnership with Feeding America, a nationwide network of 200 food banks of which FeedMore is a part, the Foundation has given more than $21 million to help launch, expand and sustain critical childhood feeding programs including summer feeding programs.

“We are thrilled to receive this impactful grant from the Morgan Stanley Foundation in support of our efforts to deliver more nutritious meals to children and families in Central Virginia,” said Tim McDermott, Chief Development Officer at FeedMore. “Morgan Stanley and its employees provide vital support for FeedMore by generous contributions like this and many hours volunteering.”

“We are honored to be able to help FeedMore in its important fight against child hunger,” said Morgan Stanley Branch Manager Hugh Steiner. “We are delighted to extend our support through this grant and provide even more children with the foods they need to learn, grow and thrive.”

“Grants like this from Morgan Stanley make a vital difference in our efforts to provide children with the nutritious meals they need every day,” said Andy Wilson, Chief Development Officer at Feeding America. “More than 13 million children in the United States live at risk of hunger. Together, we can solve hunger and ensure that children have the fuel they need to grow healthy and strong.”

Morgan Stanley employees were scheduled to participate in “Feeding Kids Around The Clock” events in more than 40 locations in the United States.